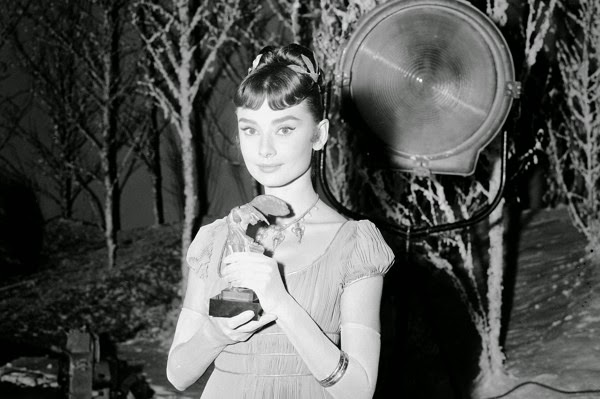 I cannot believe I last blogged since Monday but what a perfect time to research into new ideas to blog. I decided to do a '8 facts you didn't know about Audrey Hepburn' but it really should be what things I don't know about her. Every now and then, Hollywood is graced with a truly standout individual who, for whatever mixture of reasons, stands head and shoulders above the rest. They are the enduring icons, and the ones who remains classics of the silver screen even decades after their departure.
Did you know that Audrey Hepburn wasn't Capote's first choice to play Holly Golightly in
Breakfast at Tiffany's? Hope you like these unusual facts about Audrey. If you're the world's biggest Audrey Hepburn fan you may already know some of these - let me know!

2. She was born in Belgium in 1929 and lived in German-occupied Armhem during the
Second World War.

3. Her stage name 'Hepburn' was taken from her father's name.

5. She was trained as a ballerina, and during the war she secretly danced for groups of
collect money for the Dutch resistance.

6. Before she was signed up by a film studio Hepburn worked as a London chorus girl in the
late 1940's because it paid more than ballet dancing and she needed the money.

8. Truman Capote had envisioned Marilyn Monroe as the role of Holly Golightly in the film; Breakfast at Tiffany's.

Hope you enjoyed a few facts about Audrey!