A Sprinkle Of Hollywood

A sprinkle of Hollywood? That sounds a unusual title of a blog post.  I wanted it to be different so when bloggers see it they will be intrigued by the title and would scroll down to read on. Sofia Villani Scicolone, who she is you may wonder? She is an old Hollywood star who I found out about whilst visiting my grandparents a few months ago. My grandfather loved her. He told me her stage name was Sophia Loren and everyone knew her as that name. She was an Italian-French film star and when I researched I knew straight away why my grandfather loved her so much and why he wasn't as fond of Marilyn Monroe. I thought to myself why I have I not heard of here before, I remember looking at a photo of her on the internet at the beginning of the Hollywood stardom in the 1950's and thought wow she was a glamorous women and that's why she became one of the most well known actresses in the world.

Here are a few facts about Sophia

She was born on the 20th September in 1934 in Rome, Italy. Her father refused to marry her mother and left her to bring up her daughter on her own.

Sophia entered a beauty pageant at the age of 14, Miss Italia 1950 and whilst not winning, she was selected as one of the finalists. Later, she enrolled in an acting class and was selected as an extra in Mervyn Leroy's film Quo Vadis in 1951, launching her career as a motion picture actress.

She met a man called Carlo Ponti, Sr in 1950 when she was 15 and he was 37. They married on 17th September in 1957. However, Ponti was still officially married to his first wife and under Italian law because Italy did not recognise divorce at the time. The couple had their marriage unnulled in 1962.

In 1965, Ponti obtained a divorce from Giuliana in France, allowing him to marry Sophia on 9th April 1966.

They became French citizens and had two children aged 46 and 42.

She died in her own home in Switzerland at the age of 80. 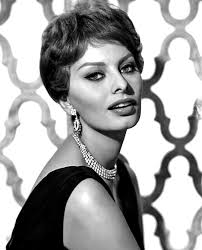